​Do you play chess? Do you enjoy playing chess face to face?  Did you know there are thousands of outdoor chess tables across North America?

Chess is a two person game and people encountering outdoor chess tables more often than not come without a chess playing partner.  Also, chess pieces cannot be set up on their own as they are likely to be blown away during bad weather or go missing.

Chess Facilitator
A chess facilitator is needed to set up pieces and look after them, act as a greeter and supervise the chess tables. If this occurs there will be large volumes of players enjoying chess during the warm weather months.  A facilitator can rapidly determine a player’s ability and match them up with a partner of similar level. This allows the players to have a comfortable, enjoyable chess experience. A facilitator can provide tips and answer chess questions, provide ideas of where to go to improve your chess ability, give further knowledge on the chess playing scene.  A facilitator also shows how to record interesting chess positions and introduce the chess language thus stirring further enthusiasm for chess.

Social Players
The vast majority of chess players are social players who have not played tournament chess.
Most chess clubs present an intimidating atmosphere of tournament competitiveness where players are often judged by the level of chess they present. Little time is spent interacting with beginner or social players. When a visitor realizes the daunting task of committing to learning enough strategy to compete at a tournament level they choose to take their chess playing experience elsewhere.

Enjoying a return visit
After a positive interaction and first name exchange with a facilitator at outdoor chess tables, a visitor could be connected via Facebook or email  in order to inform them of playing hours, weather conditions, hours when facilitator is present, special events and upcoming events and links to local clubs and activities.  Perhaps also an overview of the day’s activities and a short game of interest or a chess puzzle.

Growing a Social Chess Community
The facilitator starts a list of first name regulars (rough notes of playing strength and points of interest on each player including keenness to play others or more likely to stick to a certain group - not profound - just helpful guidance).  Eventual connection to other facilitators (other tables), meeting places and club(s)

Internet Connected
A wonderful facet of the internet is to connect various groups of tables around the world.  An astounding fact is that all the major cities in North America (and many lesser urban centers) have groups of outdoor chess tables.  Typically the outdoor chess tables do not stand alone, they come in groups or quads of four.


What's happening with thousands of outdoor chess tables now?
Most of those thousands of tables are sitting idle, gathering graffiti and aging slowly. Occasional visitors come by but not to play chess which is what they were designed for. To make those chess tables fully functional each group of them needs a chess facilitator. 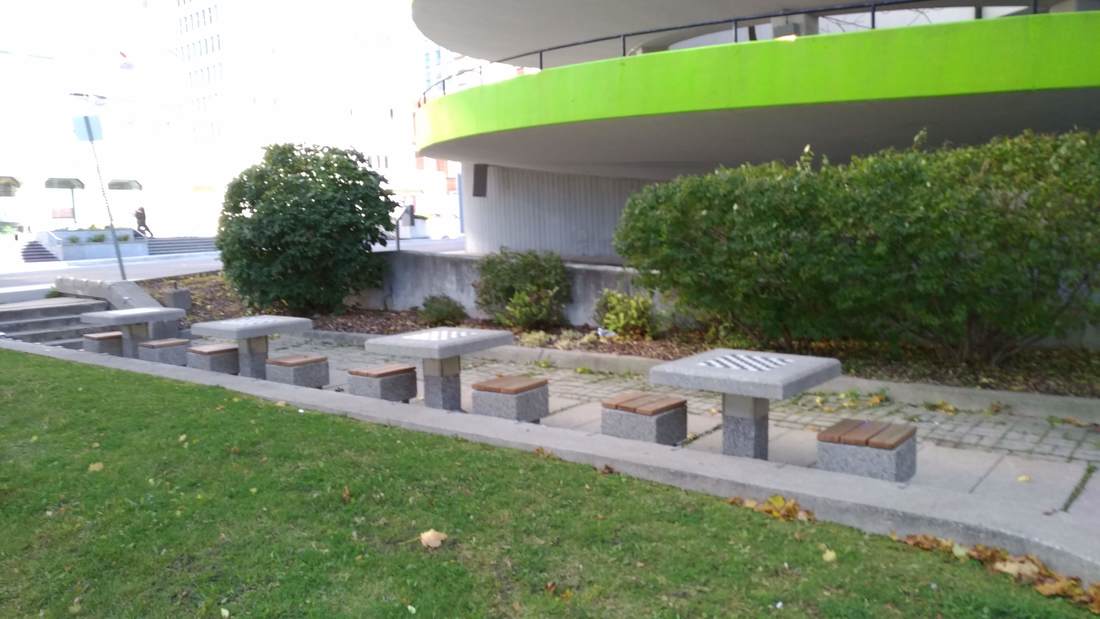 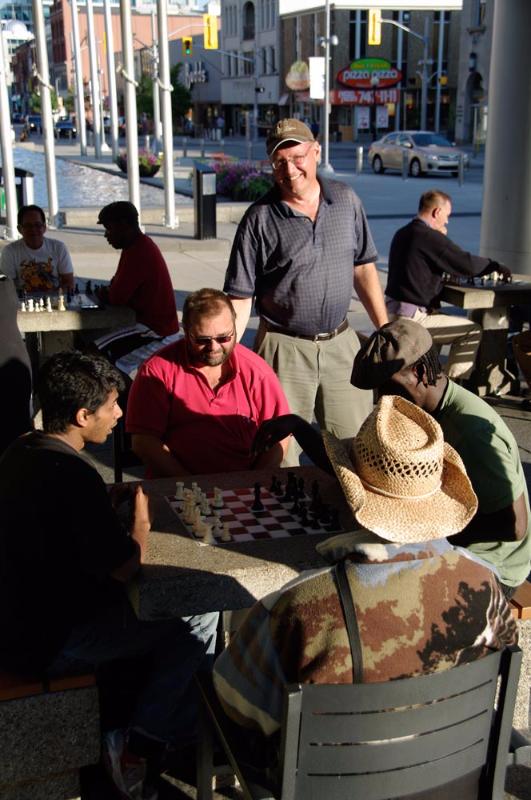 BEST - Tables in action - WITH FACILITATOR
Role of Chess Facilitator

Kitchener City Hall has two wings lining both sides of Civic Square with the main part of City hall on the east side. Civic Square is about 200 ft wide and about 150 ft deep. It fronts on King Street (main street) and has jetting fountains of water along the front. In the front of both wings are 4 chess tables (both sides). The tables are under a roof overhang and speakers play classical music all day long (to help deep thinking). There is a coffee shop just beside the tables on one side and a coffee shop right across the street on the other wing. Public washrooms are 100 ft away on both sides. There is a large Shoppers Drugmart (department store size) on the corner by one set of tables and plenty of food options very close. The tables have been outside since April 1 (they are stored over the winter in City of Kitchener storage facilities) and during that time sets could be signed out from Kitchener Tourism. My season as coordinator started June 1st. I am at the tables from 10 am to 6pm Monday thru Thursday (minus office time of course). The city encourages me to keep a stats book. A typical day at the tables: Monday June 15th. Beautiful day, no breeze, 23 degrees. Setup pieces by 1015am, one token set on Williams Coffee side (because of King Street construction - too much dust), 4 sets on Just Between Us side (Just Between Us is a quality women's clothing store). Grab a coffee and check emails. Sitting at tables by 1045am.
First guy to come by is Bill. Bill is a determined chess player. He started at the tables 4 yrs ago. He was a pure beginner (not sure of some of the moves) Last year he joined the chess club (which only meets Tuesday evenings and Sunday afternoons) I dont think he missed a week in all that time. When I play Bill I usually play pawns to the third and quiet piece development and dont initiate any captures or tactics until move 20 unless he initiates first. That way the game is competitive and he likes that. No one likes to be slaughtered. Here is my game Monday against Bill. Bill's white. Im black. 1.e4 d6 2.d4 e6 3.c4 g6 4.f4 Bg7 5.Be3 Ne7 6.Bd3 00 7.Ne2 b6 8.Nd2 Bb7 9.h4 Nd7 10.h5 c5 11.g4 cxd4 12.Bxd4 e5 13.fxe5 dxe5 14.Be3 Nc5 15.Bc2 Nd3+ 16.Bxd3 Qxd3 17.Bg5 Nc6 18.hxg6 fxg6 19.Rf1 Rxf1+ 20.Kxf1 Rf8+ 21.Ke1 Nd4 22.Nf1 Nf3+ 23.Kf2 Nd2+ 24.Bf4 Qf3+ 25.Ke1 Nxe4 0-1 and no I didnt record moves during the game. I did it at a quiet moment afterwards. By the time we finished Fazul was spectating. Fazul is about 60, from Afghanistan, distinguished looking, always dressed in a well pressed business suit even though I happen to know that for the last 5 years he has been taking English as a second language courses week days at the local adult high school nearby. Fazul and Bill decide to play and I also match up (and have a chat with) a new high school kid and Doug, another regular. By this time it is 1145am so I head inside to the Special Events storage area to load up the giant chess pieces. I play on the giant chess pieces (against any and all comers) right outside the main doors of City Hall from noon to just after 1pm. I distribute promotional literature for chess and play at the same time (as well as have conversations or exchange pleasant words with passersby). My opponent of today is Michael. Michael had a horrific car accident several years ago (and should have died) and has major physical problems. However he pushes himself and even though he barely can lift the pieces and often drops them he never gives up trying. He is a reasonable chessplayer however (about 1400 CFC). Because of his obvious trouble with moves physically the game takes a full hour. Spectators include a regular, Rob, a city police officer (in full uniform) who is the liaison between the police department and the downtown businesses. Rob and I often play but today he is kibitzing (and he is a brutal kibitzer) He calls me an ***hole for the way I finish the game and threatens to arrest me. Things escalate and he threatens to take me up to see the mayor. (now thats kibitzing!) After teardown it is 115pm and by the time Im done putting the pieces away and checking emails its 130. I then take lunch and am back at the tables by 2pm. My next opponent is Mr. Kwalchuk, a retired school teacher and former chess coach at Eastwood Collegiate. Mr. Kwalchuk is a serious player (about 1600 CFC) and wants me to play full out. Here is the game: Mr. Kwalchuk white - Me black. 1.d4 d5 2.Nf3 c5 3.e3 Nc6 4.dxc5 e5 5.Nc3 Nf6 6.a3 Bxc5 7.b4 Bd6 8.Be2 00 9.Bb2 a6 10.00 e4 11.Nd4 Ne5 12.h3 Bd7 13.f3 exf3 14.Nxf3 Bc6 15.Qd4 Qe7 16.Rad1 Rfe8 17.Rd2 Rad8 18.Nh4 Bb8 19.Nf3 Ng6 20.Nd1 Qc7 21.Bd3 Qg3 22.Bxg6 hxg6 23.Qh4 Qxh4 24.Nxh4 Ne4 0-1 and so the day goes by. The stats for Monday June 15th: 64 Participants (reasonable for early in the season on a nice day) 30 spectators, 15 seniors, 12 teens, 5 women, 1 child (about 5 - just learning the moves) Club members - Bill, Joe Volunteers - Doug 1 hr, Peter teaching his buddy Fred - 1 hr, Mike 2 hrs, Michael 1 hr Giant Pieces at Lunch noon to 1pm - 1 player (Michael), 30 spectators including Rob and Joe.
A day in the life of a chess facilitator.

​
Street Chess - How to Create Excitement
***
A lousy day weatherwise so a need for exciting chess at the tables. As Black I played this game.


Those of you looking for the latest theoretical wrinkle should have left by now - this is street chess!


The crowd is dispersing, must make it interesting again.

Whose king will survive?